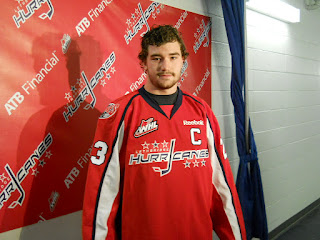 “The Hurricanes are proud to name Graham Hood as our Captain for the 2012-2013 season. Graham is a very well respected player not only on our team, but in the WHL. He is a physical presence who plays the game hard and leads by example on and off the ice” commented GM and Head Coach, Rich Preston.

Graham Hood, an Alternate Captain last year, was originally selected in the 2nd round (23rd overall) by the Regina Pats in the 2007 WHL Bantam Draft and played with the Pats until he was acquired by the Canes as part of a package deal for Carter Ashton in the 2009-2010 season. A big body at 6’3 and 220 lbs., the product of Martensville, Saskatchewan had his best career in the WHL last season with 37 points (16G, 21A) in 68 games reaching career highs in goals, assists and points.