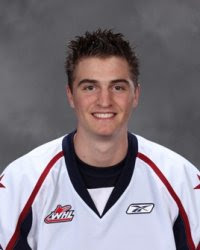 One member of the Lethbridge Hurricanes was chosen at this weekend's NHL draft in Minnesota.

Brody Sutter is coming off a strong season in Lethbridge, recording 18 goals and 42 points, after missing a good portion of the early season with a shoulder injury.

This blog post is brought to you by http://www.clearlylethbridge.com/.
Posted by Pat at 19:38