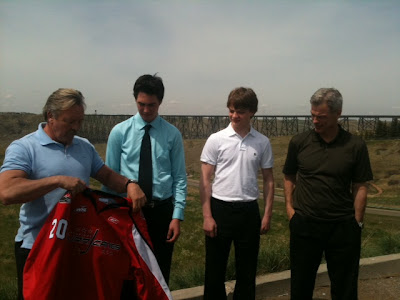 In the photo, Assistant G.M. Brad Robson presented Hurricanes jerseys to Ryan Pilon (tie) and Reid Duke (white shirt) in a photo op Friday afternoon. Head Coach and G.M. Rich Preston on the right took in the event as well as few members of the Hurricanes Board of Directors.
Pilon's jersey had the number 20 and Duke had number 11 to signify the draft year (2011). Pilon was chosen 3rd overall and Duke 5th overall. Speaking with Preston after he told me that a lot of team's had Pilon ranked number one on their lists for most of last year as well as in a number of different rankings. Preston said the Canes' had Duke listed as one of the top-two forwards in the draft and to be able to get both players "is a real special thing." When talking about Pilon, Preston chuckled and said he's never been so excited to draft a player he's never seen play before! He saw Duke play at the Alberta Cup in Lethbridge back in April, but never had a chance to see Pilon. He said it's great to have these players as part of the organization. Preston says both players will play Midget AAA this coming fall and hopefully they'll be able to step into the Hurricanes line-up in 2012-2013 season.
Congratulations to the Kootenay ICE for winning the WHL Championship over the weekend. What a run! 16-3 in the post-season. ICE owner and G.M. Jeff Chynoweth built an impressive club this year and there's no doubt that trade he made with Swift Current to pick up Cody Eakin was the clincher. Sometime a team rolls the dice and gambles with big trades like that, especially when it comes to what you give up for just one player, but for the ICE it paid off in spades. It was a deal that helped bring the Ed Chynoweth Cup back to Cranbrook. What can you say about goalie Nathan Lieuwen? This guy was nothing short of amazing in these playoffs. He was key for Kootenay and will be again as the ICE now head to the Memorial Cup in Ontario. Good luck to Kootenay and do the WHL proud!
Pat
This blog post is brought to you by http://www.clearlylethbridge.com/.
Posted by Pat at 09:14