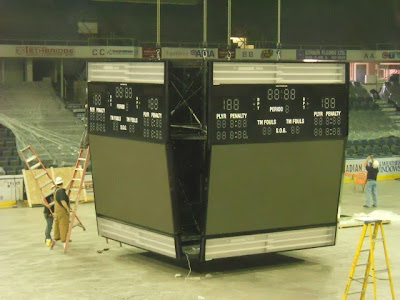 It's the piece of equipment I think most people have been waiting to see as part of the overall ENMAX Centre renovation project.

Local media got a first-hand look at the new 1.2 million dolllar video scorelcock Thursday, which is being installed right now at the facility. It's impressive, I can certainly say that. The scoreclock, we were told should be operating in a few days and after that, a few months of testing and training will take place with the new video production people.

I spoke with ENMAX Centre Operations Manager Len Overbeeke and ENMAX Centre General Manager Kim Gallucci about this milestone in the renovations, which are now into year two and will be fully completed by next March.

Overbeeke: "The scoreboard is provided by Daktronics out of Colorado and Matrix is supplying the video production side of things. The old scoreclock had a life span of 10 years and after 18 years we cut it up and dismantled it about two weeks ago. This new video clock will enhance the customer experience. We need to get people excited about things that are happening in the building whether it be a sporting event, graduation, or concert. We also need to be competitive in our market. To be able to host major events, we need to put on a quality performance and a video scoreboard allows us to be able to do that. Just in the video production side, from the video screen to the new video production room, there are 23 miles of wire! The new clock is pretty much at centre ice. We are almost centre, east to west between the players benches and the penalty box and slightly south. It's a large clock that is 19 feet wide and 18 deep. People will be able to see the video clock from anywhere in the building."

Gallucci: "We're really excited to see the new scoreboard here! It's impressive. I think when the patrons come at the end of September to the first (Hurricanes) game, they will really like what they see. This is all turning out better than we had planned, so that's a positive. Really, this is about the full fan experience. It's more than just a game. It's the replays, promotions, and all kinds of things. The look of it and the size are impressive! That LED board will be visible to anyone. There won't be a bad seat in the house. Because of the economic pressures, it brought our construction bid a little bit under budget which freed up some more money so we could get the scoreboard back in to the project and really help us facilitate some of the cost. The rest of it is from City Council. I think when people see it up and operating they will see that it's a worth-while project and really adds a lot to the facility."

This blog post is brought to you by http://www.clearlylethbridge.com/.
Posted by Pat at 11:57