I can almost bet that three seasons ago when the Lethbridge Hurricanes finished with a franchise-worst record of 12-55-2-3 and bleeding money faster than it could be printed, not many people would've thought this team could be in the position it was this season.

Just think, the season after the horrible 12 wins, the Canes had just eight wins more. A very modest improvement at best. Quite frankly that's when everything changed, in a big big way. Huge changes made at the Board of Directors level. Ultimately that's where the buck stops. Changes at the top trickled down to the office. That's when Peter Anholt was brought in as interim Head Coach and GM and following that the coaching change that brought in Brent Kisio. In between all those personnel changes came sweeping changes with players. A huge spate of trades started taking place with Anholt in charge. In fact, while Anholt was still the interim GM he made 30 different deals heading up the deadline and a few more heading into his first full season as General Manager.

The reason I mention that is because it's a time lime of how things went from horribly bad to amazingly good in roughly two seasons. This time line shows what happens when you get the right people in the right jobs and players that want to play here.

Lethbridge is no longer a graveyard that players go to die as I was once told during my last two seasons doing play-by-play, Lethbridge is a place players want to come and play. I can tell you this. Ask Jordy Bellerive, who was on the fence as to whether he was going to play his junior hockey in Lethbridge if taking up Peter Anholt on his idea to giving things a try and coming to play here was a good idea. I assume he will most definitely say yes. What player wouldn't want to come play in front of the great fans and crowds we've seen this past season?

This Board of Directors, the GM and Coaching staff have brought the Lethbridge Hurricanes back to WHL respectability. This is no longer a team being talked about as being on the verge of being sold or fans and shareholders wanting it to be sold. This shows the great things that can happen if you get the right people in the right jobs doing what they do best without interference from others. It shows a true dedication to winning and turning things around.

Watching this playoff run not as a media person, but as a fan was incredible. The Hurricanes electrified the City of Lethbridge. The fans have been amazing. It's all everyone talked about the last few months. It was great. The organziation is back on it's way to being financially stable too. Heck, a couple of playoff runs like this can do wonder for a team's pocket book!

As I mentioned earlier, finding the right combination of people on and off the ice is critical to making all this happen. The number of players who've been moved in and out in the last three seasons is something I've never ever seen during my years covering hockey. As strange as it sounds, all those players who decided to leave on their own a couple of seasons ago actually helped pave the way to the Hurricanes team of today.

This is player people will talk about for years and years to come. As I said in a tweet after Sunday's game six loss, Tyler Wong in my opinion, might be the best player to ever suit up for the Lethbridge Hurricanes in the team's 30 year franchise history. 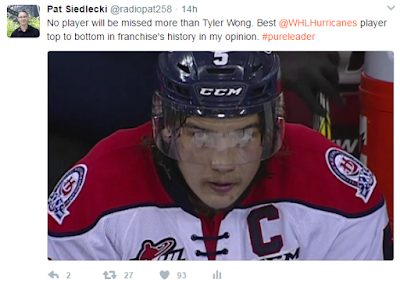 Wong has been with this team through thick and very thin. When things were tough, Wong still stuck it out. It's players like him every organization would do anything to have. Wong not only has been the face of the Hurricanes for the past number of seasons, but he's also been an great ambassador for the City of Lethbridge. Although he hails from Cochrane, Alberta Wong says Lethbridge will always be his home and hold a special place in his heart. Players like Tyler Wong don't come around too often. He lead by example, on and off the ice. He really is the on-ice reason for the turn-around with this team. Let's hope his work ethic and leadership skills will be left behind in that dressing room for players to follow in his footsteps.

Although he was the straw that stirred the Hurricanes drink, Wong has had a pretty darn good supporting cast too. Giorgio Estephan, Stuart Skinner, Egor Babenko, Ryan Vandervlis and the list goes on. One guy can't do it all. He can set the stage, but it's a team effort.

Hats off to the Lethbridge Hurricanes for a great season. Absolutely ZERO reasons to holds heads low. The bar has been raised and raised in a big way. Be proud! The future for junior hockey in Lethbidge is a bright one.