Bye Tyler.....Thanks for the Memories!

I must say, in all my years covering junior hockey, what I witnessed at the ENMAX Centre Tuesday afternoon, I've never seen before.

Fans lined-up around the concourse to have one last chance at saying hi, good-bye and getting a photo and autograph with Tyler Wong.

So much has been said in the last few days about Wong and what's he's meant to the Hurricanes and their fans, but I don't know if some folks really understand the scope of it. I've seen many great players over the years, but not one that's had an impact on the community, hockey, and fans like Tyler Wong. He's in a class all of his own. 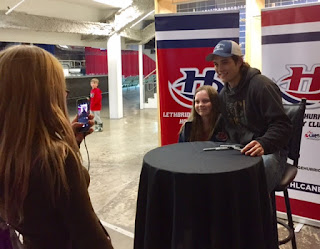 Tuesday's line-up of people to see Tyler was a true testament to his character and how much he means to these fans. It was truly an incredible sight and like I said, something I've never seen before in my 20 years involved with junior hockey in some capacity.

Even with all those fans lined-up, a few of us local media types had a chance to speak to him briefly to get his take on all of this.


Tyler Wong is loved by this fan base. The tears from some people standing in that line-up told that story plain and simple without even having to write a single word.

Below is a video Hurricanes play-by-play man Dustin Forbes put together as a tribute to Wong. I doubt he had a dry eye doing this. The video played as part of Tuesday's meet and greet.

I think I can go out on a limb here and speak for Lethbridge fan and say a huge thank you to Tyler Wong.

On a personal note, it was a pleasure to get to know him  these past five seasons and an honour to call his name on the radio during Wong's first two seasons with the team.

You're one of a kind Wonger. There is no one that can ever fill your shoes!