The Lethbridge Hurricanes are now turning their attention to Medicine Hat as the team gets ready for their second round playoff series against their biggest rivals.

It's the first time since 1991 that these two Higwhay 3 rivals will be hooking up in the post-season, so it's expected to be a heavily watched series.

In fact, The WHL on SHAW announcing Wednesday afternoon it would be broadcasting the entire series, which begins on Friday, April 7th in Medicine Hat at 7: 300 pm MDT. 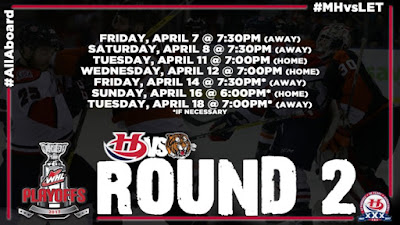 I had a chance to speak to Hurricanes Head Coach Brent Kisio the morning after the Game 7 victory over Red Deer and talked to him about the upcoming series with the Tigers.