Estephan: WHL Player of the Week 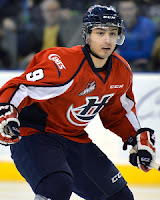 The Western Hockey League announced today that Lethbridge Hurricanes forward Giorgio Estephan has been named the WHL Player of the Week for the week ending April 9, 2017.

Estephan registered seven points (4G-3A) in three games, helping the Hurricanes score a Game 7 victory over the Red Deer Rebels to advance to the second round of the WHL Playoffs, where they’ve since split the opening two games of their best-of-seven series with the Medicine Hat Tigers.

On Tuesday, April 4, Estephan provided a goal and two assists in a 6-2 win versus Red Deer, earning third-star recognition as he helped the Hurricanes claim a Game 7 victory to advance to the second round of the WHL Playoffs. After being held off the scoresheet on Friday, April 7, he made a major impact the following night. Estephan scored three goals, including the game-winner, and added an assist in a 7-4 win at Medicine Hat on Saturday, April 8, as the Hurricanes evened their best-of-seven series with the Tigers.

Estephan, who was selected by the Buffalo Sabres in the sixth round (152nd) of the 2015 NHL Draft, is currently tied for the WHL Playoffs scoring lead with 13 points (5G-8A) through seven games, alongside teammate Tyler Wong.

The 19-year-old product of Edmonton finished the WHL regular season second on the Hurricanes in scoring with 89 points (35G-54A) in 68 games.

He was originally a first-round pick (fourth overall) of the Hurricanes at the 2012 WHL Bantam Draft.

Estephan and the Hurricanes will look to make use of home ice as they host the Medicine Hat Tigers for Games 3 and 4 in their best-of-seven series Tuesday, April 11 and Wednesday, April 12, respectively, at the Enmax Centre in Lethbridge.