The Lethbridge Hurricanes Hockey Club are set for a very special weekend that will begin Friday night with the 11th Annual Celebrity Dinner at the Coast Hotel.

The Celebrity Dinner will include a celebration of the 1996-1997 Championship Hurricanes with a large number of that championship team on hand including Chris Phillips, Dale Purinton, Bryce Salvador and Travis Brigley. Just For Laughs comedian Kelly Taylor will once again be the Master of Ceremonies along with performing his own comedy routine. 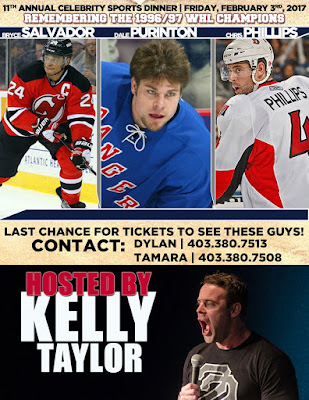 The weekend will include with a very special night scheduled for the Saturday night as the Hurricanes welcome the Moose Jaw Warriors at 7:00 pm. The Hurricanes will be wearing special 1997 jerseys during the game. The jerseys will be auctioned off during the game. The game will also include a special pre-game ceremony that will see the members of the 1997 team receive Championship rings.

Tickets for the game can be purchased online, by calling 403-329-SEAT (7328) or by visiting the ENMAX Centre or Yates Ticket Centre’s. Fans are encouraged to be in their seats by 6:20 pm on Saturday night.