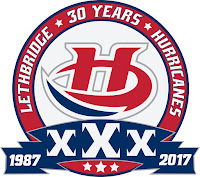 The Lethbridge Hurricanes Hockey Club is excited to announce that the 2016-2017 season will be 30th Anniversary Season of the franchise in the City of Lethbridge since relocating from Calgary to begin the 1987-1988 Western Hockey League season.

As part of the 30th Anniversary Season, the Hurricanes will be using the special hashtag, #30YearsStrong, throughout the season. In addition, the team will be unveiling a new look anniversary jersey at the 2016 Dairy Queen Home Opener that will include a special 30th Anniversary logo (seen to the left).

As well, the Hurricanes will be conducting a number of exciting and interactive celebratory initiatives throughout the season beginning with the ’30 Days of Giveaways’. For the 30 days leading into the Dairy Queen Home Opener, one Season Ticket holder will be drawn each day and will win a special prize package.

Additional special events, activities and initiatives during the season will be announced later. The 30th Anniversary Season will officially begin with the 2016 Hurricanes Golf Classic that will take place at Paradise Canyon Golf Resort on Monday, July 18th – room is still available, however, the tournament is filling up quickly.