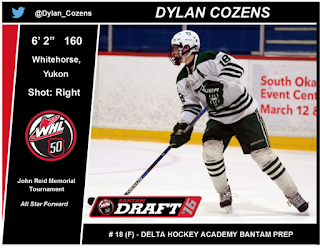 “I think any time you can have a big strong centre-ice man that plays hard and is hard to play against, it makes your team a lot better. Dylan has a lot of improving to do, he has a lot of development to do. He’s not the finished product, but we know he’s going to work hard to prepare himself to be a Hurricane when that happens,” added Anholt.

The right-hand shot forward is originally from Whitehorse, Yukon. Prior to joining the Delta Hockey Academy, Cozens spent two seasons with the Whitehorse Mustangs Bantam A team before moving away from home. In 35 games over two years, he registered 31 points (17g-14a).

“I was just really happy [getting drafted] by Lethbridge, my dad lived there for a bit, so it was pretty cool,” said Cozens. “I’m very excited to sign my first contract and I was really happy to do that with Lethbridge.”

(From the Lethbridge Hurricanes)