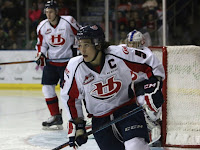 The Lethbridge Hurricanes Hockey Club would like to congratulate forward Tyler Wong on signing an Amateur Try Out with the Toronto Marlies of the American Hockey League.

Wong, who is the longest serving Hurricane, was named the 25th Captain in franchise history at the beginning of the 2015-2016 season. The now 20-year-old had a career year this season registering 89 points (43g-46a) along with 42 penalty minutes and a plus-17 finishing second in team scoring only behind Brayden Burke.

Wong was named the Hurricanes Fan Favourite award winner for the fourth straight year at the Hurricanes year-end awards ceremony. He was also the recipient of the Scholastic Award, the Herman Elfring Community Relations Award and the Three Star Award.

The Cochrane, Alberta product has skated in 248 career games over five seasons with the Hurricanes accumulating 189 points (92g-97a) along with 171 penalty minutes. He is 15th on the all-time Hurricanes game played list, 15th in all-time goals and tied for 20th in all-time points in franchise history.

Wong is the third Hurricane player to sign an AHL ATO in the last week as Giorgio Estephan and Andrew Nielsen have also both signed ATO’s. Wong will join Nielsen with the Marlies.