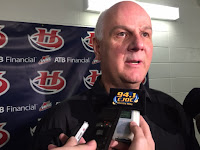 It was a chance for the two to talk about the season that was and look ahead to the off-season as the Hurricanes prepare for a new season starting this fall.

Both Anholt and Kisio were candid about things, in a season which no one expected the Hurricanes to play and finish as they did. The question is now, was this a one-off or can the Hurricanes maintain the same momentum?

The team certainly has plenty of returning players coming back this fall, which should bode extremely well. With a few extra players being overagers as well, some changes will have to be made.