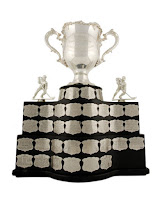 The Lethbridge Hurricanes Hockey Club is excited to announce that the MasterCard Memorial Cup will be on hand when the Hurricanes begin their 2016 WHL Playoffs on Friday at the ENMAX Centre.

The Memorial Cup will be available for fans to see and pose for photos with during the Tailgate Party from 5:00 pm until 6:00 pm. It will also be available in the Canadian Western Bank Lounge during both the first and second intermissions.
Prior to the game, the Hurricanes will hold a pre-game ceremony that will feature the trophy being presented by Lethbridge RCMP and former Hurricane, and Memorial Cup Champion, Mike Wuchterl will be dropping the ceremonial first puck.
The 98th Memorial Cup Championship tournament is slated to take place in Red Deer from May 19th until 29th. It is the first time since 1974, a span of 42 years, the tournament will be held in Alberta.

The Hurricanes begin their 2016 WHL Playoffs with Game 1 on Friday and Game 2 on Saturday, both at 7:00 pm, in their best-of-seven first round series with the Regina Pats.

(From the Lethbridge Hurricanes)