Hurricanes Beat Pats 6-3 in Game One

Cory Millette and Brayden Burke each scored twice as the Lethbridge Hurricanes beat the Regina Pats 6-3 Friday night to take game one of their first round WHL playoff series. 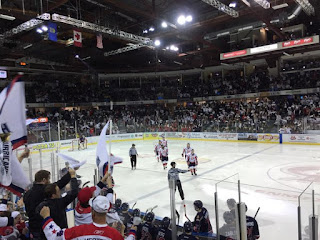 The ENMAX Centre was electric during what was the first playoff game for the Hurricanes in seven years and the home team sure did not disappoint. Penalty trouble proved very costly for the Pats as the Hurricanes scored four times on 12 power play chances in this game.

The Canes got things rolling quickly in this game. Just 1:54 into the opening period, Cory Millette scored his first of two on the night to make it 1-0 Lethbridge. That was also a power play goal. The Hurricanes then took a 2-0 lead with another goal on the man advantage. Brayden Burke scoring his first of two in the game as well, giving the Canes a two goal lead. Regina though got one of those back before the end of the period, thanks to a late power play. Adam Brooks to beat Stuart Skinner to cut the Lethbridge lead to 2-1 after 20 minutes of play.

In the second, Regina would tie the game and then take the lead. Austin Wagner evened the score at 2-2 and shortly after that Connor Hobbs scored another power play goal for the Pats to give them their first and only lead of the night, 3-2. Late in the period, the Hurricanes tied the score with a beautiful goal from Carter Folk. That put the two teams in a dead 3-3 tie through two periods of play.

In the third, things started to unravel for Regina and the Hurricanes took advantage. Just 41 seconds into the period, Brayden Burke put home his second of the night, making it 4-3 Hurricanes. That was followed up by Cory Millette's second of the game, on the power play again to put Lethbridge up by two goals for a second time. This time though they didn't let the Pats back in. Kord Pankewicz capped things off with the Hurricanes 4th power play goal in the game late in the period and the Hurricanes would win this one 6-3 in front of just under 4700 screaming fans at the ENMAX Centre.

For the first playoff game since 2009 and very little post-season experience on this team, the Hurricanes didn't look at all out place or out of their element in game one. In fact, the looked pretty darn good.

Game two goes Saturday (Mar. 26) at the ENMAX Centre at 7:00 pm MDT. The series will switch to Regina for games three and four starting next Tuesday (Mar. 29).