The Canadian Hockey League today announced that forward Giorgio Estephan of the Lethbridge Hurricanes is the CHL Player of the Week for the week ending January 24 after scoring three goals with five assists for eight points in three games with a plus-minus rating of plus-8.

Estephan helped the Hurricanes extend their winning-streak to 10 games climbing to a WHL-best 72 points last week with a 36-12-0-0 record. With points in all three games last week, Estephan also extended his personal scoring-streak to 14 games. On Wednesday he scored a goal with three assists earning second star honours in a 4-0 win over the Spokane Chiefs, then picked up a goal and two assists on Saturday as first star of a 4-3 overtime win against the Moose Jaw Warriors. His week wrapped up Sunday scoring the game-winning goal as part of a 3-0 win over the Edmonton Oil Kings. 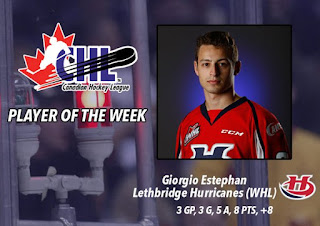 An 18-year-old from Edmonton, AB, Estephan is playing in his third career WHL season with the Hurricanes. Through 48 games of the 2015-16 campaign, Estephan is tied for seventh in WHL scoring with new career-highs in all offensive categories including 27 goals and 36 assists for 63 points.