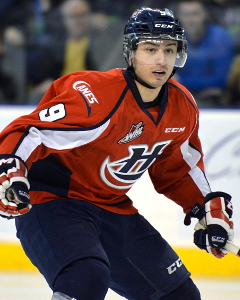 The Western Hockey League announced today that Lethbridge Hurricanes forward Giorgio Estephan has been named the WHL Player of the Week for the week ending January 24th, 2016.

Estephan recorded eight points (3g-5a) to go along with a plus-8 rating in three games to lead the Lethbridge Hurricanes to a record of 3-0-0-0 for the week and extend their season-high win streak to 10 straight.

On Wednesday, January 20th against the Spokane Chiefs, Estephan was in on all four Hurricanes goals as he recorded four points (1g-3a) to guide Lethbridge to a 4-0 victory. Estephan also finished the game with a plus-4 rating and earned second star honours. On Saturday, January 23rd, Estephan recorded another multi-point performance with a goal and two assists to propel the Hurricanes to a 4-3 overtime victory against the Moose Jaw Warriors. Estephan was named the game’s first star for his efforts. The following night, Estephan scored the opening goal against the Edmonton Oil Kings which stood as the game winner in a 3-0 victory.

The 18-year-old Edmonton, AB native has collected 63 points (27g-36a) in 48 games this season to sit tied for seventh in scoring amongst all WHL skaters. The 6-0, 189 lb forward is in his third WHL campaign with Lethbridge and has amassed 139 points (63g-76a) in 179 career WHL regular season contests.

(From the Western Hockey League)