It doesn't seem like anyone is able to stop the Cane Train these days.

The Lethrbidge Hurricanes won their 8th game in a row Wednesday night with a 5-2 victory in Vancouver. Riley Lindgren scored a pair for Lethbridge to lead the way. The game was featured on SHAW TV and after reading some things on Twitter after the game, a lot of people are saying watch out for the Hurricanes. "This team looks to be for real.".

The Canes set the pace in this game with three goals in the first period. Giorgio Estephan got things going at the 3:38 mark with his 4th of the season to make it 1-0 Canes. Less than two minutes later, Captain Tyler Wong scored his 14th of the year to put the visitors up 2-0. Just past the midway point in the period, Riley Lindgren scored his first of two on the night and his 7th of the year to make it 3-0 Lethbridge after 20 minutes of play.

In the second, the Giants got one of those back. Hayden Hopkins scored late in the period to cut the Hurricanes lead to 3-1 after 40 minutes. 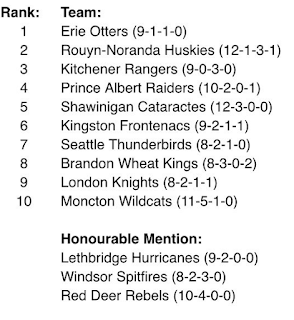 In the third period, the Hurricanes sealed the deal. Riley Lindgren scored a power play goal just over a minute into the period for his second of the night and 8th of the season to make it a 4-1 lead in favour of Lethbridge. Cory Millette added another for the Hurricanes a few minutes later when he scored his second of the season. That made it 5-1 and before the end of the game the Giants managed to get one more when Alec Baer scored, but that's as close as they'd get in this game. The Hurricanes won 5-2.

The victory improves Lethbridge to 10-2 on the season. Vancouver did out shoot the Canes 34-22, but Skinner was more than solid between the pipes in this game. The Hurricanes went 1/3 on the power play and Vancouver 0/3.

The Hurricanes now get a much-deserved day off Thursday before playing in Kamloops Friday and Kelowna Saturday. The Blazers have only 4 wins in 12 games this season, so the Canes are hoping they can extend the streak Friday.

Also, the Hurricanes got some love from the CHL Wednesday. The Canes were given an honourable mention in the weekly rankings. That hasn't happened for ages. It's well-earned. You can see the rankings above.