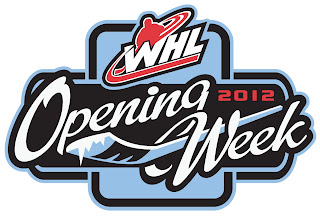 The Lethbridge Hurricanes will hit the ice Friday night at the ENMAX Centre to open the 2012-2013 WHL season.

It's the first time the Hurricanes will open a season at home in four years.  The expectations for this season are high and when I say that I mean making the playoffs. This will clearly be the goal for the Hurricaanes after not making the post-season the last 3 seasons. It's actually critical, both on and off the ice for the organization as a whole.  This is a long drought coaches, players, local media and fans want to see come to an end.

Lethbridge begins the season with it's most experienced line-up in four seasons.  Unlike last year when nearly half the team was rookies, that's not anywhere the case this time around.  Yes, the Canes are still a young team, but I think more experienced, talented, and loaded with speed.  This year's rookies to start the season include Reid Duke, Ryan Pilon, Tyler Wong, Remi Laurencelle, Axel Blomqvist, Lenny Hackman, Connor Sutton, Joel Topping, and goalie Christpoher Tai.  I think a few of these newcomers are going to be extremely fun to watch.

On the backend, the Hurricanes are fairly experienced, lead by returning players Dan Johnston, Macoy Erkamps, Spencer Galbraith, and Albin Blomqvist.  The rookies on the blueline, Joel Topping, Connor Sutton, and Ryan Pilon should complement those veterans well.  The majority of these players will be with the Hurricanes for the next few seasons, which bodes well for building chemistry and continuity for an organization which has been lacking that the past few seasons with several player movements. Johnston, though will miss the Hurricanes first few games with an upper-body injury.

In goal, it'll be the Ty Rimmer show.  Rimmer had the league's best Goals Against Average with Tri-City last season and he'll play a major role is getting this Lethbridge team back into the post-season.  Rimmer is as good as advertised and will more than likely be one of the best goalies in the WHL again this season. Christopher Tai will start the year as the Hurricanes back-up to Rimmer after Tanner Kovacs was sent back to the AJHL.

For the first time in a while, there seems to be a fair bit of optimism with the Hurricanes.  A team can only struggle for so long until things start to turn around.  This, I feel will be the beginning of some good things to come.  The fans in Lethbridge deserve some good hockey and I think they'll get to see a lot of it over the next few years.  It's never easy to see your team struggle, but when the going gets tough, acquiring top picks in the draft is a real key to building an organization in the WHL.  The Hurricanes have traded a fair number of players in the past for picks in return.  I think we will start to see the opposite happen.  No one said the Hurricanes were going to win the WHL title this season, but making the playoffs is a real good possibility.

Talking to newly-minted Captain Graham Hood the other day he told me this is an extremely tight dressing room and a great group of players.  That's a good sign coming from the Captain.  Hood is a leader.  The younger players look up to him.  If the Hurricanes leaders play like they ARE leaders this season and the younger guys follow suit, it'll be a fun season to watch.

As for the Hurricanes opponents Friday, the Medicine Hat Tigers look a fair bit different from the past few seasons.  They've lost some goal scoring and goaltenidng with Emerson Etem and Tyler Bunz no longer here.  They've also lost some strong guys on the backend in Thomas Carr and Matthew Konan.  Konan had a lot of success the past few seasons against the Hurricanes.  No question the Tigers look different, but you can never count this team out.  Hunter Shinkaruk is one of the best forwards in the WHL and the Tigers also have Curtis Valk who can score at will.  These two teams will play each other 8 times this season, twice this weekend.  For whatever reason, the Tigers seem to play better in Lethbridge and the Hurricanes better in Medicine Hat.  We will see if that continues this season.

I think we will see Edmonton and Saskatoon near the top of the Eastern Conference this season.  Regina will have a decent year, so will Brandon and Moose Jaw.  After that though, I think it's wide open and we could see just a few points separating 6 or 7 teams.  I expect the Lethbridge Hurricanes will be right in the mix.  Assistant GM and Director Player Personnel Brad Robson told me he expects the Hurricanes will have to win at least 40 games to make it into the playoffs this season. If it's going to be as tight as I think it's going to be in the East, I think Mr. Robson is very much on the right track.

It all gets going Friday at 7:00 pm (MDT) with the Hurricanes Dairy Queen Home Opener.  The puck will drops shortly after the top of the hour after some pre-game festivities.  Fred Jack and I will have the Minute Muffler Pre-Game show on 94.1, CJOC at 6:30.