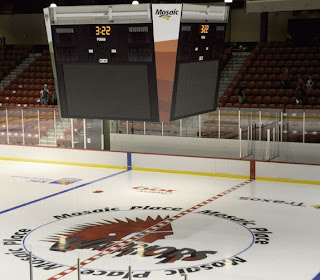 MOOSE JAW, SK. - The Lethbridge Hurricanes get set to take on the Moose Jaw Warriors tonight in the first of four meetings this season between the two teams.

This is also the Canes first game at the new Mosaic Place arena, which officially opened up a few weeks ago. The Hurricanes are hoping this new rink in Moose Jaw will be kinder to them that the old one was. Last season, the Canes made two trips into the "Crushed Can" and came out both times without scoring a single goal. The Warriors won the season series 3-1 in 2010-2011.

The Hurricanes arrived in Moose Jaw last night just before supper time and will have a light skate this morning to get familiarized with the new rink. Lethbridge comes into this game with a 2-2 record on the season while the Warriors are 3-1. Moose Jaw acquired goalie Luke Siemens from Everett this week. He may see his first action tonight against Lethbridge.

The Hurricanes will play three games in four nights on this road trip. They take on the Pats in Regina Friday and stop in Swift Current Saturday. The Canes next home game is next Tuesday when they host Edmonton. The pre-game show tonight on CJOC at 6:30. The face-off at 7:00 pm (MDT).

The latest news about Austin Fyten's injury isn't good for the 20 year old or the Lethbridge Hurricanes. Head Coach and General Manager Rich Preston informed me last night that Fyten will be out at least six months. Fyten suffered a knee injury on his final shift during a pre-season game in Taber a few weeks ago. He's expected to have surgery later this month. This is a huge blow to both the team and Fyten. The Hurricanes were hoping the overager would put up some big numbers this season along with linemates Cam Braes and Brody Sutter. The Canes acquisition of 20 year old forward Matt Marantz from Spokane last week was good timing given the new update on Fyten.

This blog post is brought to you by http://www.clearlylethbridge.com/.
Posted by Pat at 07:33