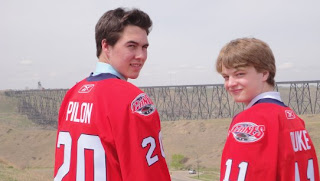 Today, Hockey Canada announced the 17 men’s 1996-born hockey players that have been chosen by the Canadian Olympic Committee to represent Canada at the 2012 Winter Youth Olympic Games.

The list of Canadian players came from nominations from Hockey Canada’s 13 Branches. From there the roster was narrowed down and through a random draw the players were selected, with at least one player from each branch making up the 17-player roster.

The Lethbridge Hurricanes are excited to announce that their two top 5 picks from the WHL Bantam Draft this year – Reid Duke and Ryan Pilon have been named to the roster. Pilon is a 6’1” 193 pound defenseman from Duck Lake, SK who plays with the Beardy’s Blackhawks of the Saskatchewan Midget Triple A Hockey League, while Duke, of Calgary, is a 5’10, 177 pound forward playing with the Calgary Royals of the AMHL.

The first ever Winter Youth Olympic Games take place in Innsbruck, Austria January 13-22, 2012. The men’s hockey event features five countries – Austria, Canada, Finland, Russia and the United States – who will play in a round robin format. Canada’s Men’s Youth Olympic team will get together in Toronto on Jan. 8th and fly as a group Jan. 9th to Austria.