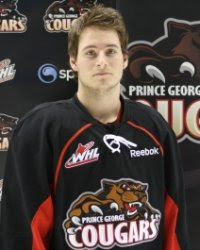 Jackson played 7 games with the Canes this season, registering 1 assist, while having a minus 5 plus/minus rating to go along with 10 PIM’s. In his three years in a Hurricanes uniform, Jackson tallied 28 points (7G, 21A) with a minus 39 plus/minus rating and 126 penalty minutes.

In getting Buonassisi, the Canes get a 5’10, 173 pound Centre from Coquitlam, BC who has played 211 career WHL games. In that time, he has 92 points (36G, 56A), he’s a minus 57 plus/minus rating with 162 PIM’s. This year in 10 games with the Cougars, Buonassisi has 4 points, a plus one rating with 16 PIM’s. Preston says “he’s a good skilled forward that can help us offensively.” Buonasisi is expected to join the team on Wednesday for practice.