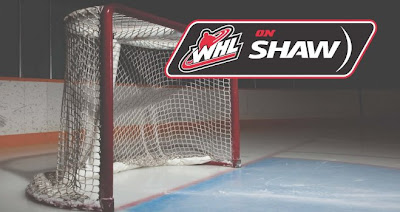 The Western Hockey League and SHAW released the TV broadcast schedule for this season.

The Lethbridge Hurricanes will be featured four times this year and SHAW will be broadcasting three of those games from the newly-renovated ENMAX Centre.

In total, SHAW will broadcast 32 regular season WHL games. For a complete list of the SHAW games visit http://www.whl.ca/.

The WHL on SHAW will also provide extensive coverage of the 2012 WHL Playoffs, broadcasting a full series in each of the four rounds including the WHL Championship Series, as team’s battle for the Ed Chynoweth Cup. SHAW is entering its eighth season as the official regional cable broadcaster of the WHL and made huge strides during the 2011 WHL Playoffs broadcasting the entire WHL Championship Series in High Definition.

"Shaw’s extensive coverage of the WHL will allow our fans to watch live the world’s finest hockey action throughout the WHL regular season and playoffs," commented WHL Commissioner Ron Robison, "We look forward to featuring some excellent match-ups again this year during the WHL on Shaw broadcasts."

The 2010-11 WHL on SHAW broadcast schedule will highlight key rivals LIVE every Friday night on ‘The WHL on SHAW Friday Night Hockey’ across Western Canada on SHAW TV and Shaw Direct ‘Channel 299’.

This blog post is brought to you by http://www.clearlylethbridge.com/.
Posted by Pat at 09:45