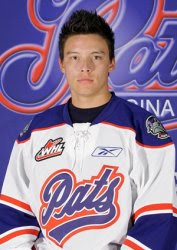 Lethbridge Hurricanes General Manager and Head Coach Rich Preston announced today that the Canes have acquired 20 year old goaltender Damien Ketlo from the Regina Pats in exchange for a conditional 5th round pick in the 2011 WHL Bantam Draft.

“We like the way he plays – we feel like he’s been a quality starter in the Eastern Conference for a while now, we’ve seen plenty of him and he’s played well against us” said Hurricanes Goaltending Coach and Assistant Coach Chris Chisamore “He is a goaltender that we think can be a game changer and he’s fundamentally solid – he’ll give us some extra depth at the position.”

In lieu of this trade, Lethbridge will still retain a pair of picks in the fifth round (Everett, Vancouver) as well as a trio of picks in the sixth round – their own, Seattle and Regina’s.

The Hurricanes expect to have the newly acquired Ketlo in town for practice early this week as he is expected to suit up for the Canes preseason matchup on Wednesday against the Medicine Hat Tigers. The September 14th game against Medicine Hat is set for Nicholas Sheran Arena in West Lethbridge in support of Lethbridge Minor Hockey. Tickets for this game are also priced at just $10 with shared proceeds from the sales going to support Lethbridge minor hockey.

(From the Ryan Ohashi, Hurricanes Manager of Commnications & Events)

This blog post is brought to you by www.clearlylethbridge.com.
Posted by Pat at 15:15