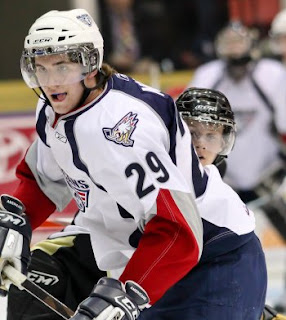 Lethbridge Hurricanes General Manager and Head Coach Rich Preston announced today that the Canes have acquired forward Max Moline from the Tri City Americans in exchange for a conditional 5th round pick in the 2012 WHL Bantam Draft.

Moline, a 93-born, 6’4” 195 pound forward and is a Lethbridge local who joins the Hurricanes with 54 WHL games under his belt. In lieu of this trade, Lethbridge will still retain a fifth round pick as well as a trio of picks in the sixth round – their own, Seattle and Regina’s.

Moline is expected to join the club this weekend as the Canes will take part in a pair of games against the Kootenay Ice (September 16th) and the Hitmen (September 17th) in the Crowsnest Pass as part of the annual “Thunder in the Pass” preseason tournament in support of Crowsnest Minor Hockey.