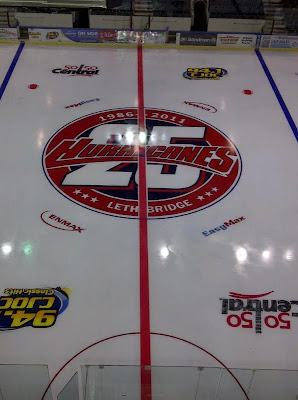 The Lethbridge Hurricanes are getting set to open up the newly-renovated ENMAX Centre this weekend.

The rink is between 80% and 85% finished, so the there is still construction going on, especially around the Hurricanes new dressing rooms that won't be ready until November and the new restaurant and lounge on the north end of the building.

ENMAX management met with the media recently to talk about the renos and what people can expect to see this weekend.

ENMAX General Manager Kim Gallucci: "The scoreclock is going to add for a great experience. We've been doing some test runs with it and it's the equivalent of what you'd see in any NHL arena. Not only the video scoreboard, but we have new audio equipment that will enhance things as well. The Hurricanes and ENMAX Centre can do all kinds of things with this. We are extremely excited about this and it will change everything. This renovation and expansion has really positioned Lethbridge and the ENMAX Centre as a primary, secondary market arena and it's state-of-the-art."

ENMAX Operations Manager Len Overbeeke also commented on the renos: "We are still under construction until around the end of February and people need to be aware of that and things are on track and on budget. The entire northwest corner of the building has been dedicated to the Lethbridge Hurricanes. The Canes will be entering the ice from the north end, but they will still be keeping the south end bench so they're going to be shooting for two periods on the northside of the ice where a lot people have seasons tickets. Construction of the Hurricanes new dressing room is running a little behind. They're looking at November 1st as the date to move into the new dressing room, so we've made other arrangements with them until then and will meet all their needs for the next few weeks. The hockey team will now have the dressing rooms, coaches room, training room, showers, and video room all in one place. When we did our seating changes a few years ago I saved a bunch of those old seats. We're actually going to put those into the Canes new video room. Those are vintage 1974 seats and hopefully the players will see and appreciate some of the history. As people come in this weekend, they will see us about 80% complete. There are things going on in here all the time. Things have been changing inside and outside the building and people will notice differences."

This blog post is brought to you by www.clearlylethbridge.com.
Posted by Pat at 12:52