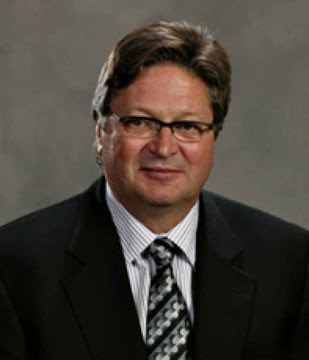 The Lethbridge Hurricanes held their 25th Annual General Meeting Wednesday night at the Holiday Inn Hotel and the meeting ended with a bit of a surprise.

Longtime Board President Brian McNaughton was not re-elected, effectively ending his tenure as a member of the Hurricanes Board of Directors. "Well, it's a little bit of a surprise, but that's the process. When you run for election, you hope to get elected, but sometimes you won't and that happened to me tonight. I've served 8 years on this board and I'm pretty happy with the way it's gone. I'm extremely excited with the direction this organization is going. I think the Hurricanes are in great shape for both the short and long terms. So I'm pretty darn happy with what's been accomplished over the past couple of years."

There were six people running for five board positions and McNaughton was the only one not elected. Vice-President Brian Wichers was re-elected along with new comers Adel Barrington, Brad Cook, Kelly Shigehiro, and Randy Jovenasso. The new board will now have to elect a new President at it's next meeting.

Before the Election of the Board, the hockey club's financial statements were given out. The Hurricanes lost a total of $395,616 during the 2010-2011 WHL season. McNaughton was confident the hockey club would make that back up. "Half of that nearly $400,000 is write-downs. We wrote down about $100,000 in the building (ENMAX Centre) which is being rebuilt, so really the net loss of the operations was actually $173,000 and making that up is going to be pretty routine. We knew we had a tough year so the Board decided to take the opportunity to write some things off and that's what we did. It was a good business decision." As for the 2011-2012 season starting this fall, the Hurricanes have actually budgeted for a surplus of roughly $40,000.

A number of reports were given out to the 85 shareholders that attended the AGM. One of those was from Business Manager Jim Bradley. He talked about the business side of things through a power point presentation and just what the organization has planned for the upcoming year and what's been doing over the past number of months. He also mentioned that it's time the Hurricanes stick to one logo or brand, so the team will permanently adopt the logo and jersey that was unveiled as a third jersey last season. "It's about commitment to the brand, whether that's the logo or the message. Lead brands in business today are consistent." Bradley also talked about some of the opportunities the club has to help grow revenue going into this season. "We have flexibility built into our ticket packages this year and the video board is the most exciting thing from a marketing standpoint and when it comes to experience as well. People are going to have a lot more fun at games because they will see things like replays and promotions." Bradley also gave an update on the state of Season Ticket sales. He says the club is closing in on the 2100 mark, which is an increase of about 16% from this time last year.

A number of other reports were given out as well, including one from Head Coach and GM Rich Preston. He talked about the team's last two drafts and the competition that will be coming up at training camp in a couple of weeks. In the Governor's Report, Herman Elfring stated that attendance across the WHL last season was up about 3.3% and that was lead by Portland which saw an increase of 26%. Elfring also announced that Lethbridge will likely be hosting a World Junior exhibition game on December 22nd at the ENMAX Centre when Russia plays the Czech Republic. Dick Gibson presented a report on Education. He stated that the Hurricanes were one of only two teams in the Western Hockey League to have all their players in some type of education program this past season. The Portland Winterhawks were the other.

Another interesting item that was discussed was a thing called the 50/50 Central Program. The Hurricanes purchased the system and the Hockey Hounds will operate it when they sell 50/50 tickets starting this season. When a 50/50 ticket is sold, it automatically gets added to a running total that'll be displayed on the video scoreclock so everyone in the building can see. This system is currently in use at the Saddledome in Calgary. The hockey club feels it can lease the system out to other events and users and expects this 50/50 system to add another revenue stream for the team.

Those are the highlights from the 2011 Hurricanes AGM.

This blog post is brought to you by http://www.clearlylethbridge.com/.