The Lethbridge Hurricanes Hockey Club announced Wednesday that the team has acquired 1997-born defenseman Tate Olson from the Prince George Cougars in exchange for a third round selection in the 2018 Western Hockey League Bantam Draft. 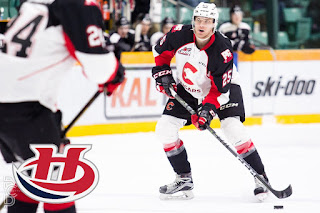 Olson, 20, was originally drafted by the Cougars in the second round (24th overall) in the 2012 Bantam Draft. In his four year career, Olson has skated in a total of 252 games registering 107 points (23g-84a) along with a plus-12 rating and 236 penalty minutes. The left-handed rearguard appeared in 67 games last year for Prince George collecting 26 points (7g-19a) with a plus-9 rating and 60 penalty minutes.
The product of Saskatoon, Saskatchewan was drafted by the Vancouver Canucks in the 2015 National Hockey League Entry Draft in the seventh round (210th overall). He had a career offensive season in 2015-2016 with the Cougars when he finished with 47 points (9g-38a) along with 90 penalty minutes.
“Tate’s one of the premier defenseman in the league and any time you get a chance to add a guy like him you have the obligation to do that,” said Hurricanes General Manager Peter Anholt. “I think coming out to the Eastern Conference will be a nice change for him. Tate is certainly capable of playing the power play, he’s got a lot of attributes and we think he can be a real good player for us.”
Olson will be sidelined until the beginning of November after undergoing off-season shoulder surgery.