Hurricanes With 4th Straight, 4-1 Over Broncos 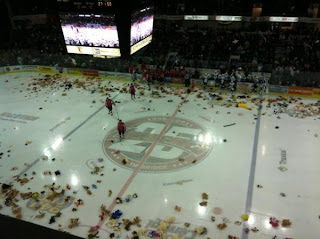 On what was Teddy bear Toss night at the ENMAX Centre, there would be no throwing of the stuffed animals in the first period of this one. Both teams went at each other in a back-and-forth, fast-paced opening 20 minutes. Damien Ketlo and Jon Groenheyde managed to keep the door closed keeping the game scoreless after one. Swift Current held the edge in shots at 10-9 after one.

In the second, the Hurricanes would get the offence going and break the scoreless tie very early, when Graham Hood, who's been hot as of late scored his 8th of the season to give Lethbridge a 1-0 lead. That was the Teddy Bear goal, sending 2928 stuffed animals onto the ice at the ENMAX Centre. After a short delay to clean the ice, the Canes added another, this time short-handed. Cam Braes moved in on a two-on-one rush and rifled the puck over Groenhyede to give Lethbridge a 2-0 lead. It was Braes' team-leading 20th goal of the season. The Hurricanes scored two goals in a span of 1:31. Later in the period, the Canes would jump ahead 3-0, when Russ Maxwell scored his 8th of the year. That would give the Hurricanes one goal each on the power play, short-handed, and even strength up to this point. Before the end of the period, Swift Current would finally get one by Damien Ketlo. Coda Gordan fired the puck past the Lethbridge goalie to cut the Canes lead to 3-1 after 40 minutes of hockey. The Broncos out shot the Canes 26-18 through two periods.

In the third, the Hurricanes would get another one. Right out of the penalty box, Albin Blomqvist took a feed from Brody Sutter and hammed a shot by Groenhyede for his first-ever WHL goal to give Lethbridge 4-1. That would also be it for Broncos goalie Jon Groenhyede. Austin Smith would play the rest of the game for Swift Current. The lead would stick all the way to the end, as the Canes would win again on home ice. Damien Ketlo was outstanding in goal, as Lethbridge was out shot 36-25. Lethbridge finished the night 1/4 on the power play and Swift Current went 0/5.

Going into the WHL's Christmas break, the Hurricanes have won 4 games in a row, 6 straight at home, 8 of their past 9 at the ENMAX Centre, and 11 of 15 overall. This dramatic turnaround in the last 6 weeks has put the Hurricanes just 8 points back of a playoff spot, something that wasn't even a topic of discussion for this team in mid-November. I will say this. This team deserves a boatload of credit for the recent 180 turn. Things weren't looking all that good two months ago and now there is a fair bit of light at the end of the tunnel. Big props to the entire team. There's still lots of work to be done in the next two months for the Hurricanes, but they could make things very interesting after the break if they've able to pick up where they've left off.

The Hurricanes are now off for the next 10 days for the WHL's annual Christmas break. They're next action isn't until December 27th when they travel to Cranbrook to take on the Kootenay ICE. The Canes will then close out the 2011 portion of their schedule December 29th and 30th with back-to-back games against the Medicine Hat Tigers.

On behalf of myself and Fred and everyone at 94.1 CJOC, we wish you a very Merry Christmas and happy 2012! For all those who tune into the radio broadcast, the Monday night radio show, or contribute their two cents to this blog thanks so much! All the best during the holiday season to you and yours and God Bless!