The Regina Pats scored twice on the power play to take a 3-2 victory over the Lethbridge Hurricanes Tuesday night in the Queen City.

The win gives the Pats the series lead for the first time, up two-games-to-one now in the best of seven set.

It was a pretty good game overall with special teams playing an integral role in this contest. 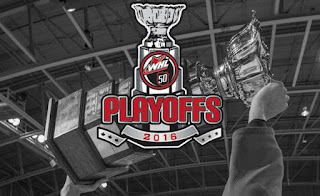 The Hurricanes got things started with a shorthanded goal 7:21 into the first period. Giorgio Estephan with his first of the post-season, giving Lethbridge a 1-0 lead. That held up through 20 minutes of play, giving the visitors a one goal lead heading into the dressing room.

In the second, the score stayed 1-0 Canes until the late stages of the period. Cole Sanford tied the game for Regina on a power play to even the score at 1-1 through 40 minutes.

In the third period, the Pats took their first lead on another power play goal. Sam Steel scored midway through the final frame to make it 2-1 Regina. A few minutes later the Pats scored again. This would turn out to be a very important goal, because when it was all said and done, it ended up being the game winner. Rykr Cole gave the Pats a 3-1 lead. That was also the only goal of the game, not scored by special teams. The Hurricanes cut into that lead in the final two minutes when Andrew Nielsen put home his first goal of the playoffs, making it a 3-2 game. That was also a power play goal. The Canes pulled the goalie to try and get the equalizer, but it wasn't going to happen on this night. Regina skated away with a 3-2 victory and a 2-1 lead in the series.

The Hurricanes had several chances as they out shot Regina 32-22. The Pats went 2/7 on the power play and the Canes finished the game 1/6.

Game Four goes tonight (Mar. 30) at the Brandt Centre in Regina. The pressure will be on the Hurricanes for sure in this one. They don't want to be coming back home facing elimination and down 3-1 in the series, so this game tonight is a biggy for the Canes. They will have to be at their very best if they want to even things up and regain home ice advantage in the series.

Game Five is set for Lethbridge on Friday (Apr. 1). Tickets went on sale a couple of days ago.