Even when things aren't looking so great, the Lethbridge Hurricanes find a way to get themselves out of a jam.

That's what happened Saturday night as the Canes erased a 2-0 deficit and came back to beat the visiting Prince Albert Raiders 3-2 in overtime. That extended the Hurricanes winning streak to seven straight and improved their overall record to a WHL-best 33-12 on the season.

The Raiders opened the scoring in this game. Just over 12:00 into the first period, Parker Kelly scored to make it 1-0 P.A.  That Raiders increased their lead a few minutes later when Sean Montgomery beat Jayden Sittler to give the visitors what looked to be a comfortable 2-0 lead through 20 minutes of play.

For Prince Albert, those two goals would happen to be the only offence they would muster up on this night. The Hurricanes cut the lead in half just over a minute into the second period. That's when Cory Millette scored his first of two in the game and 19th of the season to make it a 2-1 game in favour of the Raiders. Just past the midway point in the period, the Hurricanes ended up evening the score. Millette again, his second of the game and 20th of the season would tie the game at 2-2.

There was no scoring in the third period, so this game would go into overtime to settle the score. Just 53 seconds into the extra frame things would come to an end. Giorgio Estpehan with his 24th of the season put this game to bed and the Hurricanes came back to win this game 3-2 and get a big extra point. 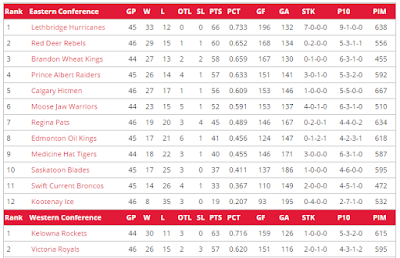 The Hurricanes have now opened up a six point lead a top of the Eastern Conference standings thanks to regulation loses by Red Deer and Brandon Saturday night. The Hurricanes have a three point lead on Kelowna for first place overall in the WHL. Given the way this past week has gone for Lethbridge, it wouldn't surprise me to see the Canes move up at least one spot in this week's CHL rankings. They currently sit in 7th.

Back to the game against P.A., the Hurricanes out shot the Raiders 34-22. Both team were unable to score on the power play. Lethbridge went 0/5 and the Raiders 0/3. The attended was close to 3800 for this game. The Hurricanes have averaged around the 4000 fan mark since December, which for a team that had serious issues putting butts in the seats the last few seasons, that's great to see. Needless to say, winning consistently changes a lot of things!!

The Hurricanes home stand continues Wednesday (Jan. 20) when they welcome the Spokane Chiefs. Spokane, right now, is hanging on to 8th spot in the Western Conference. The Hurricanes will then host Moose Jaw Saturday (Jan. 23) and Edmonton comes to town next Sunday (Jan. 24). The Canes will then head out to B.C. the following week for games in Victoria, Vancouver, and a big one in Kelowna the last weekend in January. The game against the Rockets will open the February portion of the schedule for the Canes and if these standings stay similar, that'll be the marquis match-up without a doubt with the top two teams in the WHL going at in Kelowna on February 2nd. Who would of thunk it!