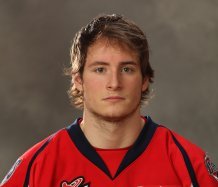 The Lethbridge Hurricanes announced Sunday that they have traded 20-year old Forward Nick Buonassisi to the Brandon Wheat Kings in exchange for a 5th round Draft pick in 2014.

With four overagers heading into training camp the team was able to move the Coquitlam, BC native to play out his final year in the WHL. The Canes were looking for more help offensively and they acquired Buonassisi last October from the Prince George Cougars in exchange for Defenceman Reid Jackson.

In his 59 games with Lethbridge, Buonassisi tallied 45 points (14G, 31A), with 62 PIM’s and he was a minus-9 plus/minus rating. Including his time with the Cougars, Buonassisi was second in team scoring with 49 points and he led all his teammates with 33 assists.

The Lethbridge Hurricanes would like to thank Nick for his contributions to the team both on and off the ice this past season.