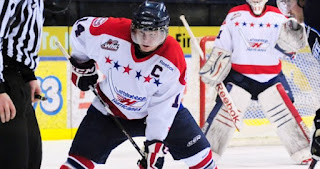 The UNB Varsity Reds men's hockey program would like to announce the addition of forward Cam Braes to their line up for the upcoming 2012-13 season.

Braes is a five year veteran of the WHL where he was team captain of the Lethbridge Hurricanes where he spent four and a half seasons.

The 5'11” 180lb native of Shawnigan Lake, BC, had a career best twenty-year old season split between the Hurricanes and the Moose Jaw Warriors when he scored 41 goals with 41 assists for 82 points before adding 15 points in the 14 play-off games. The durable Braes played 350 games in the WHL with 116 goals, 124 assists for a total of 240 points and 374 minutes in penalties. He was the winner of the Hurricanes Top Scorer and Three Stars Award, the Hardest Working Hurricane Award, the Most Sportsmanlike Player and the Fittest Rookie Award.

Head coach Gardiner MacDougall had these comments, “Cam has had a great WHL career showed continuous point total improvement in each of his five years. He has become a proven offensive catalyst with his competitive level and excellent leadership qualities. We feel the addition of Cam, along with Cam Critchlow, will provide us with an excellent nucleus to continue our successful tradition here at UNB.”


The Varsity Reds – the 2012 AUS Champions – will kick off their 2012-13 exhibition season with a Monday, Sept. 17th game against AUS runners-up Université de Moncton Aigles Bleus in Abrams Village, PEI.