Max Moline Not Returning to Hurricanes This Season 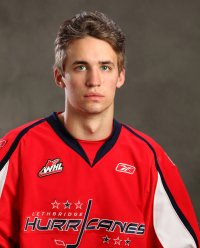 Lethbridge Hurricanes Forward Max Moline has decided to call it a career in the Western Hockey League.

The 19-year old from Lethbridge, AB advised Hurricanes General Manager and Head Coach Rich Preston that he’s decided to focus on his future and his education by attending the University of Lethbridge in the fall.

The 6’4, 195 pound Moline joined the Lethbridge Hurricanes in September of last year after a trade with the Tri-City Americans. Moline joined the team in time for the exhibition season, but suffered an injury in the first game of the regular season. Moline was sidelined for an extended period of time and finally returned on February 3rd in Brandon where he scored his first goal of the season and his first career WHL goal.

Moline played 21 games with the Hurricanes and he closes out his WHL career with 8 points (2G, 6A) in 75 games, a minus-12 +/- rating and 44 PIM’s. Preston said “on behalf of the Lethbridge Hurricanes Club I would like to thank Max for his contributions to the team this past year and wish him the very best for the future.”