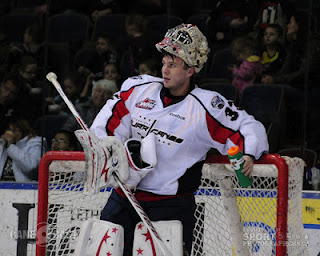 Lethbridge Hurricanes GM and Head Coach Rich Preston announced Wednesday the team traded 19 year old Goalie Liam Liston to the Vancouver Giants for a 3rd and a 6th round Bantam pick in 2013.

The native of St. Albert, AB played 24 games with the Lethbridge Hurricanes last season finishing with a 7-13 record, a 4.22 GAA and an .881 save percentage. Liston also recorded the 2nd shutout of his WHL career and first with the Canes back on December 4th against Spokane. He stopped 38 shots and 2 penalty shots in the 1-0 win over the Chiefs.


“The Lethbridge Hurricanes Hockey Club appreciates Liam Liston’s work and dedication this past season. We wish him the very best in Vancouver” stated Preston.

Liston was acquired by the Canes back on October 16th when Lethbridge sent Goalie Brandon Anderson to the Brandon Wheat Kings in exchange for Liston and Defenceman Spencer Galbraith.