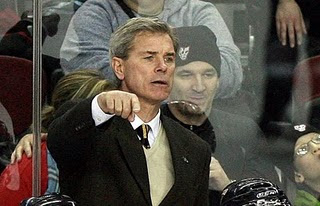 The Lethbridge Hurricanes were a busy team Thursday at the 2012 Western Hockey League Draft in Calgary.

The Canes selected 12 players and for the second straight year, had two first round selections.  They made a trade prior to their 2nd overall pick, acquiring goaltender Ty Rimmer from Tri-City for a pair of draft picks, a second rounder in 2013 and a 3rd rounder in 2014.  Lethbridge then dealt a pick away to Kelowna for a selection in the 3rd round (which they didn't have prior to the trade), and when it was all said done, the team selected 11 new prospects and traded for one of the top goaltenders in the WHL.

In my opinion, that was a huge move by the Hurricanes, acquiring Rimmer, but that also puts the Canes in a real surplus of 20 year olds heading into training camp in September.  With Rimmer added to the mix, the Canes also have Dan Johnston, Nick Buonassisi, Tyler Kizuik, Landon Oslanski, and Graham Hood as potential overagers, so Head Coach and GM Rich Preston and his Hockey Operations staff have some decisions to make before then.  Rimmer's dad, by the way is a scout for the Hurricanes, so I'm told Rimmer is extremely excited to be coming to Lethbridge for his final season in the WHL.  I spoke to Rich Preston after the draft was done.

Pat:  Rich, You picked Giorgio Estephan and Thomas Lenchyshyn with your first two picks in the opening round and then made a big trade to pick up Rimmer from Tri-City.  It appears you have more than solidified your goaltending spots for this coming season.


Preston:  "Well, when you can get a top player, let alone a top goalie and we are pretty happy about this Pat.  His dad scouts for us so they're both pretty happy, their entire family about this."

Pat:  So now that you have six 20 year old players, what's the plan?

Preston:  "Good question!!! (chuckles)  Yeah, we have too many right now, but that will all play itself out!"

Pat:  Rich, are you happy with the way the draft went for the Hurricanes this year?  It seems you picked up some pretty solid players.

Preston:  "We're really happy with everything.  We got a bit of everything....size, is what we were looking at at. Estephan is a top-rated guy.  He was a good player last year as an underage Bantam and he stood out bigtime.  This year, he had 100 points and has a great shot.  I think he'll score a lot of goals in our league.  Then Lenchyshyn from Manitoba.  I saw him play about a month ago and he's the only Bantam in western Canada playing AAA Midget, which is pretty good.  He's big, tough, and a really good skater.  We didn't think he'd be around at number 18 so we are very excited to get him.  Potnikoff is a big kid out of BC.  Colt Conrad.....we were surprised he was around in the 3rd round. He played for Pembina, Michael Soffilas's old team in Manitoba. He was their top player.  I saw him at the Western Bantam Championship in Stony Plain. He really stood out as a skilled centreman.  Goberis is a kid from Colorado.  He's a real skilled forward that plays the wing and he wants to play in our league.  I haven't seen him yet, but Brad Robson has and really likes him.  We also got a couple of big defenceman.  Jensen from Calgary and Kennedy from BC.  Both are good-sized defenceman.  Szudor is a big goalie, 6' 2, 175 pounds from Edmonton.  Grant Fuhr coaches him. We talked to Grant about Szudor and he really likes him.  Hayward, is Estephan's line-mate with the South Side Athletic Club in Edmonton.  We took him.  He's a good player, I really liked him at the Western Bantam Championships and then we selected Rohl from Calgary, Fauber from Colorado, and White from Saskatoon."

Pat:  Is the scouting staff and Hockey Operations excited about the acquisitions and what the future might hold with what's in Hurricanes system now?

Preston:  "Yes!  Very happy!  We addressed a lot of needs.  Not too many years is a team going to have so many picks in the top 5 like we've had the last few years, so you have to make good on those and I think our two first-rounders this year are going to be top players in the WHL."