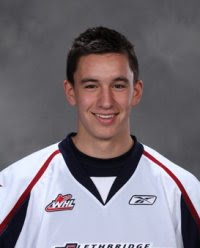 For the first time this season, Lethbridge Hurricanes Forward Phil Tot cracked the list of players eligible for the 2012 NHL draft. Tot was ranked 100th among North American skaters by Central Scouting in their final rankings released today.

The 18-year old from Calgary, AB was drafted in the 1st round (18th overall) in the 2008 WHL Bantam Draft and was signed to a WHL player agreement following the 2008-2009 Hurricanes training camp. Tot scored his first career WHL goal on October 3rd, 2009 in a game against the Prince George Cougars and in the 2009-10 season he was named the Hurricanes Scholastic Player of the Year. During his Midget Hockey playing days with the Calgary Buffaloes, in 2008-09, Tot helped his team become the first Calgary team to capture the prestigious Mac’s Midget Tournament crown in the last 10 years. That same year his Buffaloes team lost in the final of the Telus Cup.

The 2012 NHL Entry Draft will be held June 22-23 at the Consol Energy Center in Pittsburgh.
(From Esther Madziya, Hurricanes Media Relations)