Hurricanes To Pick 4th Overall in May Draft 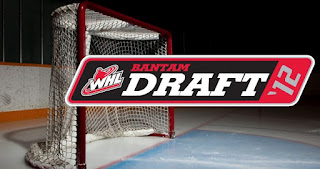 The Western Hockey League held it's annual Bantam Draft Lottery Wednesday morning in Calgary. All six non-playoff teams had a chance to move up a minimum of two spots in the lotto.

The Lethbridge Hurricanes could've moved up as high as second overall, but that didn't happened. The Seattle Thunderbirds won the draft lotto, so the Hurricanes will select 4th in the May draft. Prince Albert will get the second pick, followed by Prince George, Lethbridge, Swift Current, and Red Deer. This is also the 3rd straight year the Canes have been part of the lotto and the 3rd time in a row they will have a top 5 selection.

I spoke shortly after the lotto with Hurricanes Assistant GM Brad Robson about having the 4th overall selection on May 3rd:

"Well, it's good but unfortunate. Rich and I were saying to each other that this is going to be the last time we're going to be at the lottery. I told the Western Hockey League office this is the last time they're going to see the Lethbridge Hurricanes in the lotto. We're going to move ahead this year and get a really good player at number 4. Our scouting staff has been working hard and have identified probably six top-end players for this draft. Like I said, we're going to get a high end player with this pick as well as Moose Jaw's first round selection at number 18. We're building lots of depth and we're going to be in the playoffs next year and for a long time to come."