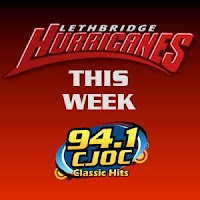 The Hurricanes turned a three game losing skid into a two game winning streak on the weekend.

After dropping their first game of an eastern swing, 6-4 in Swift Current, Lethbridge rebounded with a pair of wins, 4-2 in Brandon, and 3-2 in Regina. Prior to the Brandon game, the Hurricanes had allowed 20 goals against in their previous three games, something that had the coaches not too happy. Damien Ketlo played goal for both wins and was the game's first star in Brandon and Regina. He was outstanding between the pipes and a big reason the Canes got the victories. Mind you, the team was overall better defensively in those last two games which certainly helped a lot.

With 17 games left in the regular season, the Hurricanes sit with a record 21-33-0-1 for 43 points in 55 games. They remain 12 points out of the 8th and final playoff spot in the East, but just 2 points back of the 10th place Swift Current Broncos. Lethbridge managed only 23 wins all of last season and are more than likely to surpass that mark this season.

The Hurricanes have started their early renewals of seasons tickets for this coming fall. Early The Renewal Incentive for Current Season ticket holders (coupon in the current season ticket book) – offer expires March 9 . With the coupon the Hurricanes ticket price PER GAME – Adult $10.11, Senior $7.08, Student $6.80 and Youth $2.77 - Plus GST and Facility Fees on all tickets. Fans can pick up EASY renewal forms on the concourse of each home game from the Hurricanes Season Ticket table.

Our first show of February airs tonight on CJOC. I'll be away in Calgary for some radio station business, but Fred Jack will be hosting the program along with Marty Baceda from Global TV. On the show tonight, Hurricanes defenceman Spencer Galbraith, Canes Strength and Conditioning Coach Steve Szilagyi, and Drew Wilson the radio voice of Prince Albert Raiders. It all gets started at 6:00 pm (MST) on CJOC.