About 250 people showed up to the ENMAX Centre Sunday afternoon to watch the Hurricanes Family Day weekend Skill Competition.

The players were divided into two different teams. The red team consisted off all the veteran players and the white squad had all the rookies for the most part. They participated in several different events including agility skating, shooting accuracy, fastest skater, breakaway relay, and shootout. The afternoon ended with a little 4-on-4 hockey. Jamal Watson narrowly beat Dan Johnston in the fastest skater event. 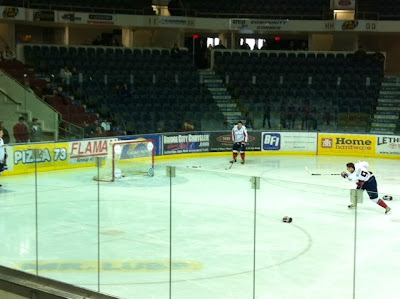 In the photo above, Juraj Bezuch takes part for the white team in the shooting accuracy event. The feedback from the event was very positive from what I've heard and the fans who did go for the two hours seemed to enjoy the afternoon. Another tip of the hat to the entire Hurricanes organization for putting on the Family Day weekend. Fred and I had a chance to introduce the players at a Sunday brunch honouring the families and billet families of the players. The Hurricanes have been doing this for a few seasons now and I can tell you the players and their families certainly enjoy it. It's chance for the players and their moms and dads to meet each other and it was great to be part of this event for another year. For a lot of the players, especially those who don't live close to home, it was a nice few days to spend time with each other before the Hurricanes turn their attention to the final four weeks of the regular season.
The Hurricanes will travel to Saskatoon Wednesday (Feb. 22) to take on the Blades. Game time is 6:00 pm (MST) on CJOC. Lethbridge returns home Friday (Feb. 24) to host the Kelowna Rockets and then next Sunday (Feb. 26) they'll head north to Edmonton for a matinee game against the Oil Kings. There will be Hurricanes This Week radio show Monday night this week because of Family Day. We'll be back LIVE from Average Joe's on February 27th.
Pat
Posted by Pat at 11:12