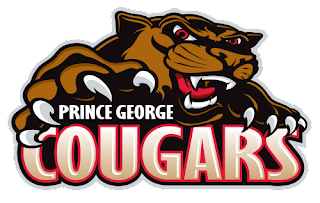 PRINCE GEORGE, BC - The Lethbridge Hurricanes take on Prince George tonight in the first of back-to-back games between these two teams this weekend.

Both clubs are near the bottom of the standings in their respective conferences. Lethbridge is 16-27-0-1 and 11th place in the Eastern Conference and Prince George is 13-26-0-2 and 9th in the West. The Cougars have just 3 wins in their last 10 games and have lost 5 in a row, while the Hurricanes are 5-5 in their last 10.

This game will mark the return of Hurricanes forward Nick Buonassisi to PG for the first time since getting traded to Lethbridge back in October. This will also be the first game for Reid Jackson against his old team, who the Canes traded to Prince George in that same deal.

In the two games these two teams played against each other last year, the Hurricanes and Cougars split the two-game set, with Lethbridge winning 4-1 and then losing 7-2 to PG the following game. This is also the Hurricanes first trip up to Northern B.C. in two seasons.

Yesterday was a big day for the Canes as they officially named Brody Sutter as the team's 21st Captain in Hurricanes history. Sutter welcomes the challenge and told me Thursday that he's very excited and honoured to be following in the footsteps of his good friend Cam Braes. He hopes to continue providing the younger players with leadership for the rest of this season.

Tonight will officially mark the post-Cam Braes era for the Hurricanes. This will be their first game after Braes was traded to Moose Jaw on Monday. There's no question the Hurricanes will be leaning on Brody Sutter, who now leads the Hurricanes is scoring with 36 points in 40 games. He will certainly be the go-to guy offensively for Lethbridge. Sutter is currently on a four game point scoring streak. Not only that, but some of the other verterans like Graham Hood, Dan Johnston, Damien Ketlo and Nick Buonassisi will be heavily relied upon to provide leadership to the younger Hurricanes players.

Game time tonight from the CN Centre in Prince George is 8:00 pm (MST). The pre-game show on CJOC at 7:30. These two teams will play again tomorrow here in P.G.