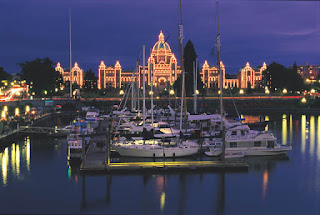 VICTORIA, BC - The Lethbridge Hurricanes will play their first game in Victoria since the mid-1990's.

The Canes arrived on Vancouver Island around 4:30 Thursday afternoon after a trip from Kelowna. For a number of players, it was the first time they saw the ocean and for others, their first trip on ferry. Having lived on the Island for 10 years, it was just another ferry ride for this guy, but no question the players enjoyed the short trip across the water.

Given that, the Hurricanes will play their first game against the former Chilliwack Bruins franchise. The Victoria Royals and the Lethbridge Hurricanes have very similar records at the moment. Both teams have played 32 games up to this point. The Canes are 10-21-0-1 while the Royals are 12-18-1-1. Victoria is struggling right now with just one win in their last 10 games, while during that same stretch, Lethbridge is 7 and 3.

These two teams will play twice in the next week as the Royals will make the trip out East to southern Alberta next Friday for the re-match. Eventhough the Hurricanes make their way out here to the West Coast again next month, this will be their only trip to Victoria this season.

Cam Braes continues to lead the Hurricanes in points and has the hot hand at the moment. Braes scored his team-leading 15th goal of the season on Wednesday, in a 5-2 loss in Kelowna. This is a special game for Braes tonight as well and is kind of a home game or sorts for him as his family's home is just north of Victoria in Shawnigan Lake. Braes is expected to have a full contingent of family and friends at Save-On-Food Memorial Centre to cheer him on this evening. Another player that's rolling right now is Nick Buonassisi. He's turned out to be a very key acquisition by the Hurricanes. Buonassisi tallied two more points for the Hurricanes in Kelowna. He's now 3rd in team scoring with 10 goals and 11 assists and is turning out to be nearly a point-a-game player for Lethbridge.

After dropping their last game on Wednesday and seeing their four game winning streak come to an end, the Hurricanes know they need to rebound in this game tonight. Liam Liston will likely get the start in goal and Damien Ketlo will go tomorrow in Vancouver. Two players the Hurricanes are going to need to keep an eye in this game will be Kevin Sundher and Logan Nelson. Sundher has 46 points this season and is by far and away the leading scorer on this Royals team. Keeping him of the scoreboard this evening will have to be a key for Lethbridge if they want to win tonight.