Hurricanes Update From The Mac's 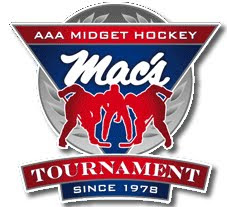 The Lethbridge Hurricanes are keeping a watchful eye over their 11 players competing at the Mac’s AAA Midget hockey tournament in Calgary. In the first day of action Monday, 4 of their drafted players (3 from 2011 and 1 from 2010) combined for 7 points with their respective teams.

It was a busy day again for the Canes 2010 listed goalie Christopher Tai of the Greater Vancouver Canadiens. Tuesday, he faced 50 shots and gave up 8 goals as his Canadiens dropped an 8-1 decision to Russia Severstal/Locomotiv, but he made a number of unbelievable saves and for his efforts, he was named the game star for his team. In the two games played, Tai has faced a total of 91 shots. The UFA Bisons and Beardy’s Blackhawks saw draft picks Ryan Pilon and Tyler Wong go head to head. The game ended in a 1-1 tie with 2010 9th round draft pick, Lenny Hackman, picking up an assist for UFA. Hurricanes draft picks were held off the scoresheet in the Saskatoon Contacts 2-1 loss to the St. Albert Raiders and the Prince Albert Mintos 3-1 win over the Calgary Buffaloes. Hurricanes Assistant GM, Brad Robson says Bryton Sayers played well for the Mintos. The feature game was between the Calgary Royals and the Valley West Hawks. The Royals won the game 6-2 with Reid Duke, the Canes 1st round draft pick this year registering a goal and an assist in the win. The final game had the Red Deer Optimist Rebels take on the Saskatoon Blazers which has Carter Amson and Chris Thorimbert on their roster. The Rebels were dominant in a 5-0 shutout of the Blazers.

Lethbridge Hurricanes scouting staff will be on hand for day 3 of the tournament with players on Prince Albert, Beardy’s UFA, Greater Vancouver, Calgary Royals and the Saskatoon Blazers all in action. For more information on the Mac’s visit http://www.macstournament.ab.ca/.