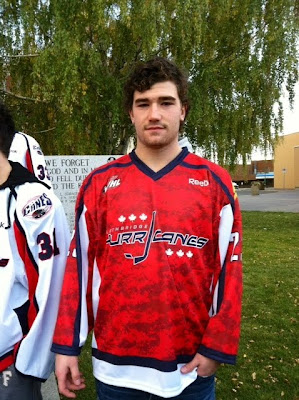 The Lethbridge Hurricanes will wear a special jersey for one game next month to honour Canada's fallen war veterans. (Graham Hood sports the new look on the left)

The Canes will sport the new look on November 9th when they play host to the Seattle Thunderbirds. Team Media Relations Coordinator Esther Madziya says they went through a number of ideas to best represent the Canadian military and show the team's appreciation. On the regular Hurricanes jersey are stars. Those will be replaced with maple leafs on this special jersey which will be red in colour and feature an army fatigue pattern on the front. Madziya says on one shoulder will be a "Support Your Troops" ribbon and on the other shoulder will be a Canadian flag. She says the jerseys will be auctioned off on http://www.hurricanesauction.com/. between November 3rd and November 14th. All the proceeds raised will be shared between the Legion poppy fund and the local military museum. 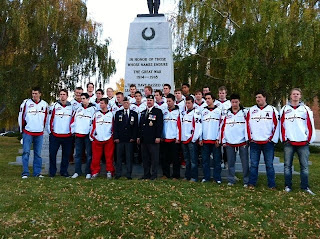 Glen Miller with the General Stewart Branch of the Royal Canadian Legion says the Hurricanes worked with the Canadian military on the design concept for these jerseys. He says the hockey team has really taken things a notch forward with the look of these jerseys.