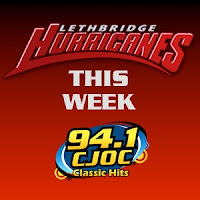 The Lethbridge Hurricanes are coming off a three game Saskatchewan road trip with only one point to show.

The Canes dropped a 3-2 decision in Moose Jaw, lost 5-4 in a shoot out in Regina, and then a 6-3 defeat in Swift Current. After three weeks of this new WHL season, the Hurricanes sit with a record of 2-4-0-1. Lethbridge is hurting with the injury bug at the moment. In Swift Current on Saturday, the Hurricanes scratched Brody Sutter, Reid Jackson, Michael Sofillas, Austin Fyten, Brandyn Hulit, and Jay Merkley. All six missed the game with various injuries. Assistant Coach Chris Chisamore wasn't too happy on the CJOC post-game show after the Saturday loss, saying the veterans on this team are going have to play better, plain and simple if the Hurricanes are going to be successful. That said, I thought some of the youngsters like Erkamps, McKechnie, and Watson played well on this latest trip.

This week is one of the busiest stretches for this Hurricanes club with 5 games in 8 days, including games against Edmonton, Red Deer, Swift Current and two games versus Kootenay. Besides the Broncos, every one of those teams the Hurricanes face in the next week are well above the .500 mark. It's very important that the Hurricanes pick up a few points during this next week. The Canes also have to cut down their roster to 25 players this week and also get down to three overages. It'll be a busy week for Head Coach and G.M. Rich Preston on and off this ice.

On our Thanksgiving edition of Hurricanes This Week, Fred and I will be joined by forward Austin Fyten, who is out six months with a knee injury. We will then be joined by Assistant Coach Chris Chisamore. . The show starts at 6:00 pm (MDT) on CJOC. The program will be available for download on the CJOC website within an hour after the show ends.

This blog post is brought to you by http://www.clearlylethbridge.com/
Posted by Pat at 06:58