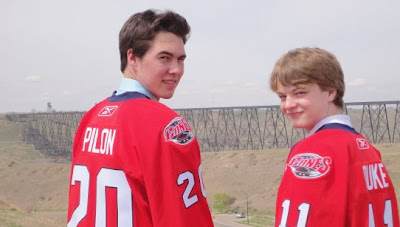 “Both these young men are elite talents and after seeing them perform at training camp and throughout last season we are incredibly proud to add them to our program.” said Robson “To have the opportunity to draft and sign two players of this caliber and on the back of what we see as a very talented 95 born group led by the likes of Top 5 pick Jay Merkley – we believe we have the makings of something very special here in Lethbridge.”

Both Pilon and Duke have already made Hurricanes history as the first pair of Top 5 selections the Canes have ever drafted in the same year. The Hurricanes history of top five selections is a short one made up of only last year’s top pick Jay Merkley (3rd overall – 2010); Dwight King (4th overall – 2004) and Paul Elliot (4th overall – 1995). Pilon joins Merkley as the Hurricanes highest ever selections in the WHL Bantam Draft. Merkley, a 95-born forward and native of Calgary has remained with the team entering the preseason and is also expected to take to the ice for tonight’s match up.

(Picture and write up from www.lethbridgehurricanes.com. Provided by Ryan Ohashi, Manager of Hurricanes Communications & Events)

This blog post is brought to you by http://www.clearlylethbridge.com/.
Posted by Pat at 15:13