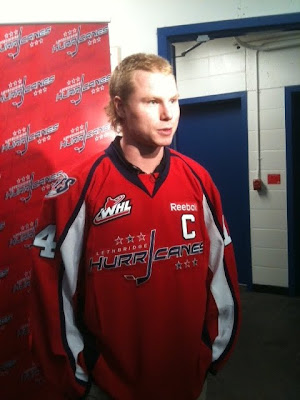 Cam Braes has been named the Lethbridge Hurricanes Captain for the 2011-2012 WHL season.

Braes was presented with his jersey today at Adams Ice Arena bearing the "C". He becomes the 20th Captain in Hurricanes history.

Braes: "I know wearing the "C" comes with a bit more pressure and responsibility, but I'm not going to change the way I play. I've always considered myself a leader on the team, even when I was younger. The only thing that might change is stepping up a bit more to fight for our younger guys. We have other good leaders in the room like Fyten, Johnston, Ryckman, and Sutter, so it won't all be on me, but it's really important to lead by example. I've learned a lot from guys like Ben Wright, Carter Bancks, and Mike Reddington over the years. I'd like to take a little bit from all three of those Captains and develop into my own style and hopefully that'll be good for the team. This is a privilege in what is a special season for the Hurricanes with the 25th Anniversary. I've been here a long time and I'm pretty happy to get this honour."

"Cam's been with our program for a long time, coming in as a 16 year old. He's gone through other Captains like Wright and Bancks and this is the next step for him. He's earned this and he's really grown as a man and as a hockey player and he's what we want the Hurricanes to be. He has a lot of respect in the dressing room and this is not just coming from the coaching staff."

Braes was drafted 48th overall by the Canes in 2006. He joins a long list of players to wear the "C" over the past 25 years in Lethbridge.

This blog post is brought to you by http://www.clearlylethbridge.com/.
Posted by Pat at 14:06